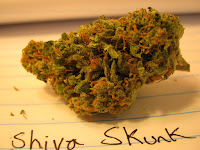 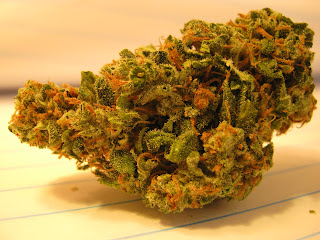 This Shiva Skunk strain sample was purchased from The Herbal Center - THC in Denver, CO.  As you can see Shiva Skunk is an attractive marijuana strain, with mid to large size, bushy, light green nugs covered in THC pollen and blotches of orange hairs.  Shiva Skunk likely gets its heavy resin coating from its Norther Lights Family lineage.